Ron has had many success stories in his racing career. From training the winner of a Maiden at Nowra to winning Group Races at Mooney Valley. With a knack of producing smart horses Ron has been to all levels of Racing. Please see the latest success stories from the stable.

Manawanui has given Ron his first Group One success by taking out the$1million Group One Golden Rose at Rosehill.

Jockey Glyn Schofield rode a sensational race adopting catch me if you can tactics once the pace was slow and the son of Oratorio proved too good for boom colt Smart Missile.

Congratulations to all connections - Party Hard!

MANA Strolls around the Valley

With only 5 other rivals to contest the event Manawanui proved to strong for his rivals in the 2040mtr contest. Winning by 2.5 lengths on the post he did it pretty much within himself.

Glyn jumped him then took a hold to give Manawanui a chance to settle towards the back of the field where he raced strongly. Approaching the 500 Glyn clicked up Mana and within a few strides he was up outside the leader when they straightened up.

On entering the straigh Manawanui took over the running still under hands and heals riding from the jock and raced to the line to take out the Blue Ribbon 3yo Feature. 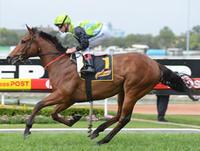 Another Stakes win for Manawanui

Facing a small field of only 5 rivals Manawanui made light work of them strolling around the 1500mtr distance and running home in race record time and 33.53sec for his last 600mtrs under a throttle hold to take out the $250.000 Group 2 event.

Manawanui had no trouble finding the lead on jumping and just went about his work as if it was a barrier trial. In some ways it was because his main aim will come in two weeks when he faces off with the likes of smart 3yo's Helmet & Smart Missile in the Group 1 Caulfield Guineas.

MANAWANUI returns with a bang

MANAWANUI has returned to racing after 11 months on the side line with injuries and problems with a brilliant win in the Group 3 Bill Ritchie HCPat Royal Randwick. 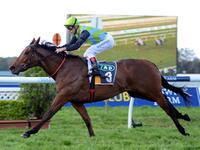 Manawanui takes out the Group 3 at the Farm

3yo Gelding Manawanui stamped himself as one of the main players when it comes to Spring racing for 3yo's.

Manawanui took out the Group 3 Up and Coming Stakes at Warwick Farm on Saturday 20th August in nothing short of brilliant fashion. After giving the leaders 5 lengths approaching the turn Manawanui strode upto them on the point of the turn then just treated his rivals with complete distain as he put 3 lengths on them in 2 strides. He raced away to win eased down by 4.5 lengths.
The acceleration was blistering as he made his rivals look 2nd rate when taking out the Group 3 race first up. Not only the fact he was first up but on a heavy 9 track over 1300mtrs it was a magnificent effort.
With still a decision on which path he takes next his owners have some exciting times ahead.

SO CERTAIN breaks her maiden in style

SO CERTAIN breaks her maiden in style at Hawkesbury. She is a horse that has always shown ability and it was on display here when she put a way her opposition with ease.

Smart Mare HARLEM SHUFFLE returns to the winners circle with a very nice win in the BM65 over 1300mtrs.

HARLEM SHUFFLE travelled well in the run before finishing fast down the outside to finish over the top of her well fancied rivals.

The filly showed us what she has been showing the stable for some time leading up to her first race start and that is she is above average.

After a luckless 2nd in her first start back TIGON won in impressive fashion breaking the class record by over 2 seconds.

PERFECT ROUGE has a gutsy win at Hawkesbury. Only lightly raced the 6yo Gelding by Belong To Me was too quick over the short 1000mtr course at Hawkesbury recently.

Having only his 6th race start and only his 4th from a long break he was too quick for his rivals around Hawkesbury.

Promising 4yo Mare CHANGE broke her maiden in Canberra today having only her 3rd race start.

Given every chance by her rider the Mare stuck to the rails and kept finding the line in an unsuitable race over 1280mtrs. She is certainly looking for longer in her trips but showed today that she is one to follow

4yo Tiger Hill mare - TIGON broke through at Kembla Grange for a very good maiden win. After showing enourmous ability as a young horse she just could not find her right racing pattern till Saturday at Kembla.

Ron has done a great job with this Mare basically going back to the drawing board when things did not pan out the way we would have liked and he changed her training pattern to enhance her very good turn of foot.

This was very evident in her win where the Mare settled early in the run worse than mid field before unleashing a withering turn of foot to race away and win her maiden easy on the line.

Gotadollar Grabs The Cash At Goulburn

Our 3yo Ghostly Grey GOTADOLLAR breaks his maiden at his 4th career start at Goulbourn. Crying out for a firm surface Gotadollar showed us what he has been showing Ron in his work the last couple of weeks.

A firm surface coupled with a good ride was the winning recipe for Gotadollar to score very well in the Colts & Geldings 1300m Maiden at Goulbourn. Jumping well as he has been doing and travelling well to the turn Gotadollar straightened up with plenty of room to move but it was only his final 100m where he charged to the line to score in a deceptive finish from 12 other rivals.
Kathy O’Hara was full of praise for the Grey and advised that he is still learning his trade and was likely to improve even further with maturity and time.
It was a credit to Ron and his team to get him over the line after 3 previous runs going into this race.
“He has always shown me he can gallop this bloke”. “Going on his track work I was not surprised he finished as well as he did," said Ron.
"His owners have shown patience with him and I'm very pleased he has started to repay his debt to them. 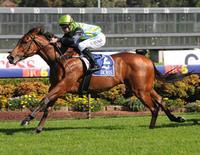 Back to Back for Smart Horse

2yo Oratorio Gelding MANAWANUI puts together back to back wins in town when winning impressively yesterday at Canterbury Park.

Making a name for himself MANAWANUI is starting to get a following after his impressive start to his racing career. After finishing 3rd behind the subsequent Group 3 Winner "DO YOU THINK", Manawanui stormed home in great fashion after missing the start in his second race to win with ease.

Taking on a small but capable field at Canterbury in his 3rd career start Manawanui jumped well and traveled like the winner a long way from home. Straightening up he let down with his devastating turn of foot to race clear and record his second successive win from only 3 career starts.

He will now head to the paddock for a well deserved rest before coming back for a crack at some more handy races during the Spring.

The son of ORATORIO (Ire) was having his only his second race start when he was slow away and 2nd last on the fence before unleashing a devistating finish to run his rivals down.

Champagne Goes Back To Back

Another well timed ride by in form jockey Tommy Berry guided Champagne Express to another win today in the nations capital.

Very consistant in his grade Champagne Express proved very hard to beat today and showed just how unlucky he has been over the last couple of months in much harder grade.

Well the term "Deservid of a win" is an understatement for CHAMPAGNE EXPRESS that saluted today in the Nations Capital Canberra.

Ridden a treat by in form Jockey Tommy Berry he gave Champagne Express a lovely run in transit and looked to be travelling extremely well throughout. His class got him through at the end as he has been very competitave at mid week level in town but just kept finding a couple better on the day. He had his fair share of bad luck in a few runs and today he had every thing go his way.

Ron has been very patient with him and has kept the faith in this horse throughout his bad luck runs but also it is a tribute to his owners that know he is a good horse on his day and given the favours he will produce.

Smart Mare Gets Home at Canterbury

Cloudy Morning was back to her best recently with a very authorative win at Canterbury Park on Wednesday 19th May 2010. Drawing the extreme outside gate her jockey had no choice but to get well back on her and even rounding the turn it took all her brilliance to give them such a good break before running them down late with some smart closing sectionals.

INNINGS was a brilliant winner today at Rosehill Gardens. A little slow out in his previous 2 runs Chris Munce had him out and running early and put him into the race when they straightened up. His customary strong finish proved too good for his opposition in the run to the line. He really looked like he relished the 1400mtrs today.

What away to break your Maiden

Well what better way to break your Maiden than winning at 50/1. Exactly what CHAMPAGNE EXPRESS did today at Hawkesbury, he was gallant in winning today and patience has paid off today for his connections. Been knocking on the door but after todays effort closing fast down the outside and finishing off his race well we are hoping he may have turned the corner.

Cloudy Morning almost registered a Hat Trick at Headquarters today. Jockey Glyn Schofield gave her a good run but was momentarily held up in the straight. It took the very smart Swift Alliance to just get the bob in on the line to relegate her into 2nd.

Back to Back for Cloudy Morning

CLOUDY MORNING goes back to back with her Super win at Rosehill Gardens today. Given every chance by Chris Munce - "She sprinted pretty quick on a very ordinary track" Munce Said. Starting to put a good record together for herself with only 5 starts now for 2 wins and 2 3rd Placings.

Cloudy Morning breaks through at Canterbury

Smart filly CLOUDY MORNING today broke her maiden status in great style at Canterbury Park. At only her 4th career start she showed that she is above average racing in a not too favourable position early before Chris Munce bought her to the outside where she let down with a terrific turn of foot to gather in the field and finish over the top.